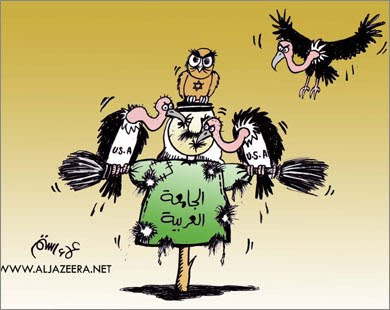 "24/03/2010 Arab leaders gather for an annual summit in Libya at the weekend determined to "rescue" occupied Al-Quds as Israel defies international calls for a settlement freeze in the Holy City.....

In the run-up to the summit, the head of the 22-member Arab League Amr Mussa called for all talks with the Zionist entity, direct or indirect, to be suspended [They have just agreed on 4 months of more "negotiations!"]. "Negotiations with Israel at this time are pointless," he said.

His deputy Ahmed Ben Helli said on Tuesday that Arab foreign ministers would draft a resolution outlining measures "to rescue Jerusalem from being Judaised." [You mean they have noticed?]

The draft will be discussed at a preparatory ministers' meeting in Sirte on Thursday before being submitted to heads of state for approval.

Arab diplomats said the aim is to set up a commission to record Israeli "violations" in occupied Jerusalem for subsequent referral to the International Court of Justice in The Hague [So, this is the BIG plan? I am holding my breath!]......."
Posted by Tony at 2:23 PM