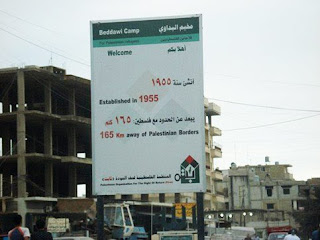 "The relationship between the Lebanese government and the Palestinian refugee camps in Lebanon is changing. The process of redefining the old relationship began explosively with the battle and subsequent demolition of the Nahr al-Bared refugee camp, near the northern city of Tripoli, in 2007. Now the Lebanese army is erecting a barrier around the nearby Baddawi refugee camp because of "security concerns."

According to Baddawi's Popular Committee, which is comprised of different Palestinian political groups and governs the camp, the Lebanese army claimed that the barrier is being built to prevent smuggling and the infiltration of Islamic extremists into the camp.....

Palestinians in Lebanon view the issue of disarmament warily. Chief among their concerns is not weapons, but civil rights. In particular, Palestinians are denied the right to work in Lebanon in a range of blue- and white-collar professions....."
Posted by Tony at 9:35 AM