Who is Killing Whom? 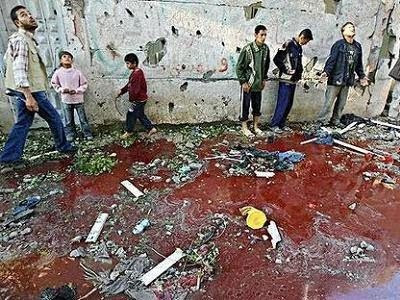 "One man dead in Israel and the whole world knows. He actually was not Israeli, but an unfortunate immigrant worker from Thailand....

Aside from the walls and laws that imprison the Palestinians already, Israeli leaders, academics and military experts, and backed by Zionist supporters, have spoken of transfer, curbing Palestinian births and putting them on a “diet”. The most chilling proposal was put by a former chief rabbi in May 2007 when he advocated carpet bombing Gaza. His son who is also a chief rabbi elaborated: "If they don't stop after we kill 100, then we must kill a thousand, and if they do not stop after 1,000 then we must kill 10,000. If they still don't stop we must kill 100,000, even a 1,000,000. Whatever it takes to make them stop."....."
Posted by Tony at 9:08 AM