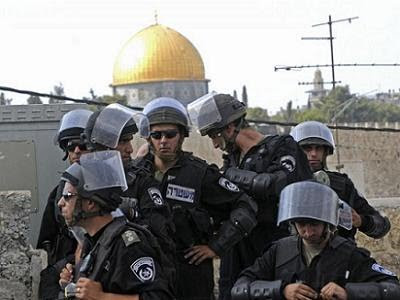 "The Israeli government has indicated that it will press ahead with a plan to enlarge the Jewish prayer plaza at the Western Wall in Jerusalem’s Old City, despite warnings that the move risks triggering a third intifada.

Israeli officials rejected this week a Jerusalem court’s proposal to shelve the plan after the judge accepted that the plaza’s expansion would violate the “status quo” arrangement covering the Old City’s holy places. Islamic authorities agreed to the arrangement after Israel occupied East Jerusalem in 1967.

The site eyed by Israeli officials is located at the Mughrabi Gate, an entrance to the mosque compound known as the Haram al Sharif, the most sensitive site in the conflict between Israel and the Palestinians. Inside are Al Aqsa Mosque and the golden-topped Dome of the Rock......

Jewish groups soon sprang up demanding more: that the mosques be blown up to make way for a third temple that would bring nearer the arrival of the Messiah.

Since the outbreak of the second intifada, little of the status quo agreement remains. Israeli movement restrictions affecting both Gaza and the West Bank mean that today only a tiny number of Palestinians can reach the mosques. Palestinian institutions are also barred from operating inside Jerusalem.

Meanwhile, settlers and Israeli officials have encroached on more and more land around the mosque compound. At the Camp David talks with the Palestinians in 2000, Israel proposed for the first time that Jews be allowed to pray in the compound and that Israel have a degree of sovereignty over the site.

In recent years Jews have started to be escorted by Israeli police inside the compound through the Mughrabi Gate, though praying so far has not been sanctioned. "
Posted by Tony at 9:18 AM