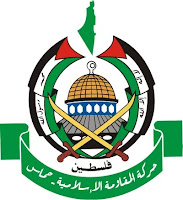 COMMENT: I usually don't post articles penned by this mouthpiece of the Syrian regime. However, in this case and since the Hamas leadership is in Damascus, I thought that his views about Hamas are instructive. Enjoy!

"DAMASCUS - Anyone who has watched the performance of Hamas or followed its rhetoric since its founding in Palestine in the late 1980s realizes that the Islamic group has greatly matured over the past 20 years.

Originally, Hamas shunned everything related to the Oslo Peace Agreement signed by Palestinian president Yasser Arafat, claiming that by accepting United Nations resolutions Arafat was offering de facto recognition of Israel. The founding charter of Hamas refused to recognize the Jewish state and promised to eradicate it completely, thereby restoring all of Palestine of 1948.

It refused to hold government or parliamentary office in the Palestinian National Authority (PNA) that was born out of the Oslo Agreement and waged a bloody war against Israel during the second intifada that broke out 10 years ago, in September 2000. It also refused to recognize any US role in the Middle East. Today, 22 years after its founding, Hamas is taking a long hard look at its history, learning from both its successes and mistakes to chart a new course for the party and its top leadership.

Things began to change in 2006, when Hamas decided to run for the first post-Arafat parliament in the Palestinian territories - a product of the Oslo Agreement. By agreeing to hold office in an institution created by the peace process, Hamas was actually recognizing the Oslo Accords. In its campaign, although Hamas called for maintaining the armed struggle against Israel, it did not call for the establishment of an Islamic state in Palestine, as stated in its 1988 charter, "Israel will exist and will continue to exist until Islam will obliterate it, just as it obliterated others before it."......

Let us take a closer look at the details. Hamas boycotted the January 2005 election of President Mahmud Abbas, but did participate in the municipal elections of May 2005, taking strongholds like Rafah in the Gaza Strip and Qaliqiyah in the West Bank, with a sweeping majority. In the parliamentary elections of 2006, it took 42.9% of the votes and 74 of the 132 seats after presenting the electorate with a "List of Change and Reform".

Hamas hoped to be given a chance to prove its merit and rule the Palestinian territories, offering a 10-year truce to Israel in return for complete withdrawal from the West Bank, Gaza Strip and East Jerusalem. It did not call for liberation of all of Palestine - realizing that politics is the art of the possible and that such a demand would fall on deaf ears in the international community........

The mainstream leaders of Hamas, however, clearly wanted to be recognized as statesmen, rather than simply guerilla warriors. The scenario they had in mind was that of Arafat himself, who after years of work in the Palestinian underground, rose to become an elected president in the 1990s, bent on providing jobs, paying salaries, attracting investment and bringing both security and normalcy to the Palestinian territories.

What really mattered, the leaders of Hamas soon realized, were better schools for the Palestinians, finer and cheaper hospitals and higher living standards for the citizens of the West Bank and Gaza. Rooting out corruption and cranking out more PhD students at Palestinian universities became more pressing to them than waging an underground battle against Israel.

A few months back, Ismail Haniyya, the prime minister of the Hamas-led government in Gaza, announced that he welcomed the positive momentum brought to the region by US President Barack Obama. He was willing to give Obama the benefit of the doubt should the latter apply needed pressure on Israel to end the siege of Gaza. Gone were the days of Hamas refusing to accept any US role in the Middle East.

Last week, Hamas released detained British journalist Paul Martin, much to the relief of the British government, from jail in Gaza. This showed that Hamas could solve problems in the Middle East, reminding of how a few years back it had helped release BBC anchor Alan Johnston from captivity in Gaza. Hamas also recently announced that it was willing to accept the Arab Peace Initiative, proposed at the Beirut summit of 2002, which recognized Israel by the 1967 borders. Also seemingly gone were the days of Hamas refusing any peace deal not based on the liberation of all of Palestine.

There are a multitude of reasons why Hamas has changed attitude, while maintaining nevertheless, its original dream of liberating Palestine. One is a desire to come to power in the Palestinian territories - an ambition shared by political parties throughout history.

It happened to Fatah in 1993, when Arafat realized that armed combat alone would never succeed in liberating Palestine or bringing him to power in the Palestinian territories. Another reason why Hamas has softened its policy is the amount of destruction and bloodshed imposed on Gaza since the war of 2008-2009. Although it outlived the Gaza war, Hamas realized that people under its jurisdiction were suffering unbearable conditions and that it had to elevate their living standards - fast. If softening its policies was the price for easing suffering in Gaza, then this was a price Hamas was willing to pay.

A third reason why Hamas is changing fast is yet another realization, being how different its natural surrounding is to that of Hezbollah, which has the luxury of maintaining a hard line policy, and yet, co-sharing power with pro-Western elements in Lebanese politics.

First, co-sharing power with Fatah is clearly not possible in the Palestinian territories, despite all attempts at doing just that since 2006. Second, while Hezbollah is sheltered by the geographic proximity of Syria, Hamas is neighbored by a very hostile Egyptian government, which far from offering support, makes life all the more difficult for the Gazans.

While Hezbollah also makes use of the rugged terrain of south Lebanon, fighting from the caves and mountains, Hamas cannot do that in flat Gaza, being an easy target for Israeli warplanes. Additionally, Hezbollah takes its security very seriously and has made sure that under no circumstances do the Israelis get the chance to infiltrate the Hezbollah community.

Clearly from the results of 2006, Israel has no information on the whereabouts of heavyweight Hezbollah commanders. Otherwise it would have gunned them down, as it has been doing with Hamas leaders since the 1990s.

Within the Palestinian territories, hunger has people by the throat, making it very easy for Israel to send out an army of spies and informers to buy off those in dire need for money. Because of this, Israel has managed to strike down scores of Hamas officials like its founder Ahmad Yassin, Rantisi, and was suspected of playing a part in the death of Arafat himself in 2004.

In January it managed to assassinate Mahmoud al-Mabhouh, another Hamas heavyweight, in Dubai, and last weekend arrested the founder of Hamas in Ramallah, Maher Udda. A few weeks ago, the son of Sheikh Hasan Youssef, a top Hamas founder, came out to announce that he had been working with Israeli intelligence Mossad since the 1990s, and had since moved to the US and converted to Christianity.

The information he provided apparently saved the life of Israeli President Shimon Peres and led to the arrest of influential Palestinians like Marwan Barghouti. Such a case is unheard of in Hezbollah circles, showing just how difficult it is for Hamas to digest a reality: because of poverty, Israel has infiltrated Palestinian society in dramatically sophisticated ways. Poverty on the streets, an indifferent international community, all topped with a desire to rule, explain why Hamas is wiser in 2010 than ever before."
Posted by Tony at 11:26 PM