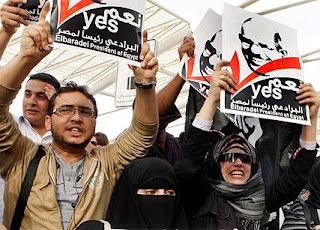 "More than 250,000 Egyptians live and work in the oil-rich country of Kuwait. Yet when just three met at a local café to attend a small meeting of supporters of Dr. Mohammed ElBaradei, former IAEA head and possible Egyptian presidential contender—they were arrested.....

In less than 48 hours, Kuwait had managed to deport 21 Egyptians. At the time of this writing, up to 20 remain incarcerated. Human Rights Watch (HRW) quickly issued a press release condemning the Kuwaiti government’s actions. They appealed for a halt to the persecution of ElBaradei supporters, freedom for those still in detention and the return of the deportees to their homes and families in Kuwait.....
So why did they do it?
As I wrote last week, Middle East monarchs and autocrats fear ElBaradei’s potential to galvanize Egyptians into demanding political change and free elections might lead their citizens to do likewise.
By deporting ElBaradei’s supporters, Kuwait’s royal family in essence cast its vote for Mubarak well ahead of Egypt’s 2011 elections. The “brotherhood” of dictators that has never received the people’s sanction always sticks together.
Gamal Eid, an Egyptian activist and head of the Arabic Network for Human Rights and Information (ANHRI) remarked, “These deportations are the Kuwaiti government's favor to the current Egyptian government.”
The ANHRI now reports that the United Arab Emirates has blocked the opposition and pro-ElBaradei Web site, Save Egypt Front, despite the fact it doesn’t host any content related to the Emirates......
“In Cairo, around 15 women flanked by dozens of khaki-clad Egyptian police protested a few blocks from the Kuwaiti embassy over the deportations, chanting ‘May the (ruler) of Kuwait fall!’”
And on Tuesday, dozens of Egyptians from various opposition groups demonstrated in front of the High Court in favor of constitutional reforms and an end to police brutality. Some even carried signs reading “Down with Mubarak.” Unlike last week’s protests that resulted in severe beatings, this time the police largely looked on.
So, in the smallest of ways, it has begun....."
Posted by Tony at 9:39 AM