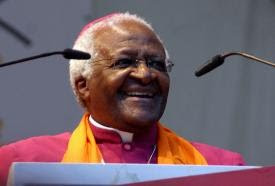 Published on Wednesday, April 14, 2010 by The Daily California (UC Berkeley)

"International attention will descend on the ASUC Senate meeting tonight as senators consider upholding the passage of a controversial bill urging the student government and the University of California to divest from two companies that have provided war supplies to the Israeli military.

The bill names two companies-United Technologies and General Electric-as supplying Israel with the technology necessary to attack civilian populations in Lebanon, the Gaza Strip and the West Bank. The bill originally passed the senate March 17 by a 16-4 vote following about six hours of discussion. A two-thirds majority, or 14 votes, is needed in order to override the veto....

In a recent letter to the UC Berkeley community, Tutu, who won the 1984 Nobel Peace Prize for his efforts opposing apartheid in South Africa-said he endorsed the bill and urged senators to uphold the original vote, which he compared to similar efforts at UC Berkeley to divest from South Africa in the 1980s. He said in an e-mail Tuesday that he had a message for ASUC senators.

"I salute you for wanting to take a moral stand," he said in the e-mail. "(Your predecessors) changed the moral climate in the U.S. and the consequence was the Anti-Apartheid legislation, which helped to dismantle apartheid non-violently. Today is your turn. Will you look back on this day with pride or with shame?"....."
Posted by Tony at 4:10 PM