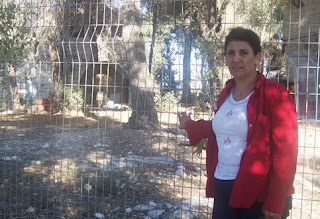 (The author's mother standing near the site of the Deir Yassin massacre more than 60 years after it happened. (Dina Elmuti)
Dina Elmuti writing from Deir Yassin
"Deir Yassin," she says with a sadness, a sense of loss in her eyes each time she speaks of the atrocious day she lost her home. "Deir Yassin," she says with a childlike innocence in her voice as she recalls sweet memories before her entire world was completely denatured by evil. "Deir Yassin," the imperishable words of my grandmother continue to resonate with me each day for she made me promise to never forget, and that's a promise I intend to keep to her.

I followed the imperiously-placed road signs leading to Givat Shaul until the memories began flooding back, one by one. With no place to park, I took the chance of leaving the yellow-plated car on the side of the road, near the abandoned blue fence so I would be able to step back in time on foot. In the cool breeze of that afternoon, standing on the ledge overlooking the Har HaMenuchot cemetery in scenic view of the Jewish Holocaust memorial, Yad Vashem, I inhaled deeply and digested the view of what was now known as Givat Shaul. As I stood there taking in the surreal surroundings of Mount Herzl and Yad Vashem, I was overcome by emotions as the tales of my grandmother soon came to life right before my very eyes.

"See right there," she pointed behind me, "that was my father's stone quarry, and there's the grain mill." For as long as I live, I'll never forget the look on her face, the way her lips quivered, the way she tapped her tired fingers on her chest with such pride, and the high pitch in her voice as she spoke with such nostalgia. As a little girl, she played house with her friends at the nearby monastery surrounded by fig, almond and apple trees, just as any child would do, oblivious to the tragedy that awaited them. At eight years old though, her childhood was no longer one free of trauma and injustice. In less than a day, she was forced to leave everything she had ever known behind, taking nothing with her but the clothes on her back. Sixty-two years ago, she had once called this place home. This was home, and without her knowledge, her permission, or her right, it was all taken away. Someone else callously decided it was no longer hers to claim. The thought of that still makes me feel as though I've been kicked repeatedly in the stomach.
Posted by thankgodimatheist at 2:41 AM