"It looks as though the Palestinian Authority (PA), sick of being slated as an Israeli puppet, is trying to reinvent itself as the People's Authority.

The PA has upped support for some models of "popular resistance", with increasing numbers of officials turning up to demonstrate at various events such as at the weekly anti-wall protests in the West Bank villages of Bil'in and Na'alin....

But at the same time, there's a worry that this is just a tactic, not a strategy – and one likely to be pursued only as long as negotiations with Israel are at an impasse.
"For us, nonviolent direct action is a way of life," says Bethlehem campaigner Ahmed al-Azah. "It is not just a trend that the PA can back now, and then put pressure on us later when the Americans persuade them to resume negotiations." 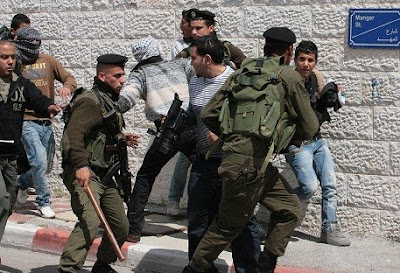 Also, the PA's appetite for protest seems picky: it was PA forces, for instance, that recently helped to disperse demonstrations in Bethlehem.....

But even this prescribed list of support-worthy demonstrations is too much for Israel, which has already asked the PA to drop support for popular protest and voiced concern over a "Fayyad intifada"[what a joke! An Intifada by the Palestinian Ben Gurion!]......

But the PA continues to accept the restraints that bind it, unable or unwilling to break them. Maybe that's one of the reasons why the graffiti in Nablus urges resistance to the "fake, American-imposed government". By opting to be the preferred government of the Middle East quartet and Israel, by complying with all those accompanying, belittling and disempowering demands, the PA is backed into a corner – and it will take more than small tactical shifts to clean up its contaminated image."
Posted by Tony at 7:15 AM