Noam Chomsky, Gilbert Achcar: On the Legitimacy of the State 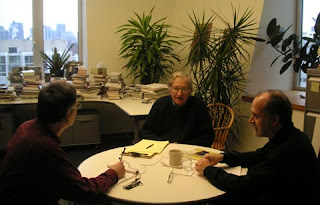 "Noam Chomsky: I don’t think that the notion of legitimacy of a state means very much. Is the United States a legitimate state? It’s based on genocide; it conquered half of Mexico. What makes it legitimate? The way the international system is set up, states have certain rights; that has nothing to do with their legitimacy. Every state you can think of is based on violence, repression, expulsion, and all sorts of crimes. And the state system itself has no inherent legitimacy. It’s just an institutional form that developed and that was imposed with plenty of violence. The question of legitimacy just doesn’t arise. There is an international order in which it is essentially agreed that states have certain rights, but that provides them with no legitimacy, Israel or anyone else.

IOA Editor: An illuminating exchange between Noam Chomsky and Gilbert Achcar on the important question of the legitimacy of the state, and how it applies to Israel and other nation states. Presented in the context of the current wave of accusations that critics of the Israeli occupation, and of Israel’s systematic and ongoing violations of international law, are “delegitimizers” — a recently coined term created by Israeli propaganda experts as part of an effort to, in their words, “delegitimize the delegitimizers.”...."
Posted by Tony at 7:32 AM