Iran is Obama's 'only chance' of success: Ahmadinejad 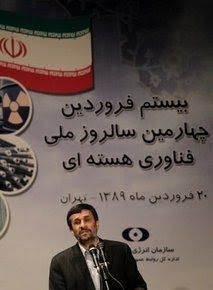 "TEHRAN (AFP) – President Mahmoud Ahmadinejad said on Tuesday that Iran was the "only chance" for his US counterpart Barack Obama to succeed after the crises Washington has faced in neighbouring Iraq and Afghanistan.

Ahmadinejad also said he is currently drafting a letter to Obama which will be "published in due time."

His remarks came soon after Washington said the credibility of the UN Security Council "was at stake" in the push to impose new sanctions against Iran for defiantly pursuing its controversial nuclear programme.

"Mr Obama has only one chance and that is Iran. This is not emotional talk but scientific. He has but one place to say that 'I made a change and I turned over the world equation' and that is Iran," Ahmadinejad said in a live interview on state television.

"He has but one chance to stay as head of the state and succeed. Obama cannot do anything in Palestine. He has no chance. What can he do in Iraq? Nothing. And Afghanistan is too complicated.

"The best way for him is to accept and respect Iran and enter into cooperation. Many new opportunities will be created for him."....."
Posted by Tony at 3:32 PM