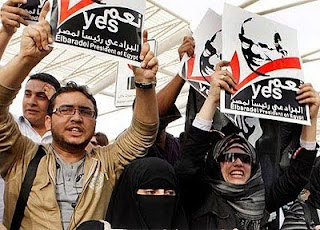 In a report published by UPI on Tuesday, ElBaradei described resistance the only path open to the Palestinian people, because the Israeli occupation only understands the language of force.

"The peace process has become a stupid joke which we talk about without achieving any progress," the Egyptian diplomat reportedly said, adding that the Arabs should back their negotiation option with force and deterrence.

He also criticized Cairo's construction of a steel wall along the border with the Gaza Strip, aimed at disrupting Palestinians' "survival" tunnel network, as harmful to Egypt's reputation.

He described Egypt's construction of the wall as joining Israel in its closure of the strip, which he said "has become the world's largest prison."

"The logical solution to the problem would be to close the tunnels and open border crossings while creating a free trade zone in Rafah where Palestinians can trade and then return to Gaza."...."
Posted by Tony at 4:24 AM