The mean streets of Cairo 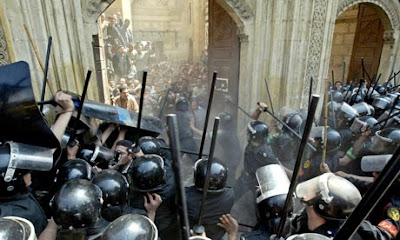 Egyptian demonstrators continue to get beaten up by the police. Is there some way to make their protests more effective?

"It is protest season once again in Egypt. Scores of activists take to the streets only to be met by hundreds, if not thousands, of black-clad baton-wielding riot police from the Egyptian government. What ensues is almost barbaric; the activists are beaten, abused, often detained and some of the female protesters are sexually harassed. It is a never-ending spiral that has left the country lamenting a continued political stalemate.

Just look at what happened on 6 April and 13 April in Cairo. Hundreds of Egyptian protesters, mainly youth from the 6 April Movement, took to the streets to demand constitutional reforms. What followed was a police beat-down that must be condemned at every level. Protesters were violently attacked on both occasions. One woman reported a broken arm on April 6 and on April 13, one young man passed out after being violently beaten by riot police.

Even journalists couldn't get away from the abuse at the hands of the state. Cameras were quickly confiscated and a number of reporters said police shoved them when they attempted to get close to the action. Cairo-based journalist Sarah Carr reported on her Twitter account that an officer had grabbed her behind in one scuffle.

No wonder the opposition community is angry. Their anger is well founded and these protesters have every right to demonstrate and have their voices heard. Their grievances are real.
But there can be an alternative, if we look at other nations' struggle to make a new beginning. The revolution can happen in Egypt, but it must be done thoughtfully.....

Two successful protest movements can be a good starting point for the opposition in Egypt to choose a different path.

Second, the struggle of Martin Luther King and African-Americans in the United States is an example, possibly more poignant in today's Egypt, of how change can be made manifest. King and his followers employed the most dangerous challenge to the government: boycott.....

While the opposition continues to demand constitutional change, real change – in the likeness of King's bus boycott – would show that smaller, grassroots change can lift the people up to a level where they can then go after the larger, constitutional issues, much as the civil rights movement: start small, then go big.....

....Egypt needs change, but the current route is not working."
Posted by Tony at 6:54 AM