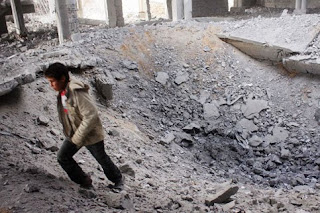 "......Despite his own Zionist affiliations and loyalty to Israel, Justice Richard Goldstone saw the danger of tailoring his UN-backed report on war crimes in Gaza to exonerate Israel. He had the decency and courage to put the rule of law and humanity ahead of the savage condemnation he knew would come from talking truth to power.The same can be said of Richard Falk, the Jewish professor emeritus from Princeton University and UN special rapporteur in the occupied Palestinian territories, who was denied entry into Israel because he described Israel's siege on Gaza as a "Holocaust in the making" ("Israel deports American academic," Guardian, 15 December 2008). Israel's treatment was insulting enough, but now shamefully, the Palestinian Authority has asked the Human Rights Council to "postpone" his report on Gaza and, as Nadia Hijab reported, is asking him to resign ("PA's betrayal of human rights defenders the unkindest cut," Nadia Hijab, 14 March 2010).
These are honorable men, but we too can stand on principle in smaller ways, whether that is refusing to buy Israeli goods at our local store, boycotting an Israeli-government sponsored event or exposing and protesting the collusion between governments and corporations with Israel. That is what it means to become part of a worldwide civil movement that will do what our leaders will not: pressure Israel to dismantle the matrix of control on Palestine and make reparations for the decades of injustices it has perpetrated against its people.
It is indeed possible for all of us to "squeeze out of reality some of its potentialities," the reality that University of Melbourne Professor Ghassan Hage has said is found in those utopic moments that come from challenging our own thoughts, fears and biases. In that space lies the untapped power we seek, to speak the truth without fear or favor. In that space lies the potential for political change. In that space, there will always be hope for Palestine.
Posted by Tony at 4:33 AM