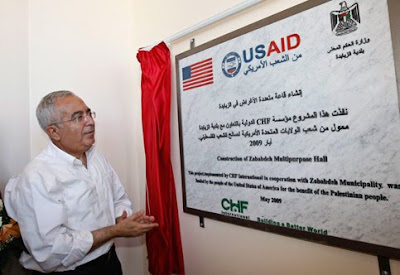 The Arabic version of this was posted yesterday.

"The Palestinian Authority is pregnant! Indeed, it is the unelected and American-imposed Palestinian Prime Minister Salam Fayyad who is pregnant. He told the Israeli newspaper Haaretz in a recent interview that "the time for this baby to be born will come ... and we estimate it will come around 2011." Unlike females of the human species but like female whales, the gestation period for male Palestinian collaborators with the Israeli occupation extends at least to two years. Fayyad, "the Palestinian Ben-Gurion," as Israeli President Shimon Peres recently dubbed him, had declared his pregnancy in a document he issued on 25 August 2009 titled "Palestine: Ending the Occupation and Establishing the State," and more recently to Haaretz: "the birth of a Palestinian state will be celebrated as a day of joy by the entire community of nations."

We seem to already know the name, weight, ideological color and the physical make-up of this "baby;" nay we even know the political structure, and the foreign policy of the fruit of Fayyad's womb: a tiny Palestinian "state" that recognizes Israel as a "biblical" Jewish state. The time of birth will be determined by Fayyad as both mother and midwife. While the last immaculate conception that took place in Palestine was in Nazareth, it remains unclear if what is unfolding in Ramallah is a second immaculate conception, as no paternity tests have been scheduled as of yet for this illegitimate baby.

Given the longstanding affairs that Fayyad has had with the Americans since his stint at the International Monetary Fund from 1995 to 2002, some heretics reject the theory of immaculate conception and claim to know the identity of the father and point to Fayyad's words as evidence. According to Haaretz, Fayyad is planning to induce labor in August 2011 in order "for the state to be born during the first term of [US President] Barack Obama," the most likely father according to the heretics. Non-Cuban cigars will be on hand for immediate distribution to the friends and family of the happy couple....

After these preparations are finalized, Fayyad will give birth to his illegitimate American baby, christened "Palestine." Unlike the Nazarene baby, Fayyad's baby will be the harbinger not of salvation but of more misery for the Palestinian people. Gifts to mother and child should be sent care of Salam Fayyad's office in Ramallah."
Posted by Tony at 10:11 AM