"In the eyes of the state, we don't exist here" 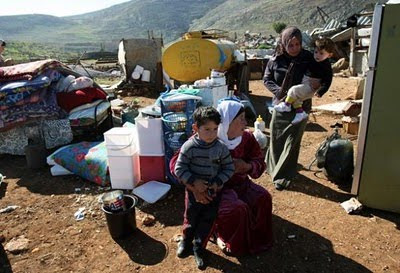 ".....Ismayil asserted that home demolition policies forced upon Palestinians inside Israel are exactly the same as those in the occupied West Bank, including East Jerusalem, and the Gaza Strip.

"There is no difference," he said. "When they want to destroy a house, they impose a curfew, they close the area, and they bring hundreds of police and soldiers with dogs. Helicopters hover overhead. They bring busloads of Jewish extremist settlers with them to empty furniture from the houses, and arrest people who refuse to be evicted."

"We experience the same policies of apartheid here in '48 [Israel] as those that are in effect in the occupied territories," Ismayil added. "People on the outside think that we're enjoying Israel's gift of democracy. But we're in the exact same situation. There is no peace, no democracy here.""
Posted by Tony at 10:08 AM