US must deliver justice on friendly fire 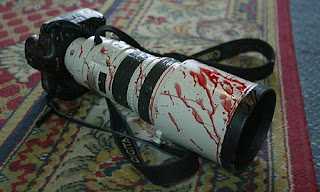 Too many journalists have died at the hands of the US army in Iraq. It's time the Pentagon stopped protecting the perpetrators

(Left: The camera of an injured photographer lies covered with blood on the 15th floor of Baghdad's Palestine hotel, 8 April 2003)

"The release last Monday of the US military video Collateral Murder by Wikileaks has already being dubbed a landmark equal to the Abu Ghraib pictures. It could not have come at a more appropriate time as global organisations of journalists commemorate today a similar slaughter of journalists that took place at the hands of the US army seven years ago. Just before noon on 8 April 2003, journalists billeted at the Palestine hotel in Baghdad watched in horror from their balconies as an M1A1 Abrams tank fired a heat round from nearly a mile away on the Jumhurya bridge toward the hotel. The shell hit a 15th-floor balcony, fatally wounding veteran Reuters cameraman Taras Protsyuk and Spanish cameraman José Couso of Telecinco. Three other Reuters staff were injured – Paul Pasquale, Samia Nakhoul and photographer Faleh Kheiber.
That morning there was intense fighting all around the hotel in what was to be one of the last days of the battle of Baghdad. Among the 100 or so journalists staying at the Palestine many were huddled on the balconies observing the fight, but none would have ever imagined that they themselves would become targets.
The scene inside the Abrams tank and the exchange between US commanders prior to the order to fire is not as finely documented as the attack by the Apache helicopter shown in Collateral Murder, but the similarities are plenty......
For the last seven years, journalists' organisations have been urging US presidents – first George Bush, now Barack Obama – to meet their obligations and deliver justice and fair treatment to the victims of violence by its own soldiers. Their lack of response so far has been the same, showing their armed forces that criminal brutality or carelessness would not be punished. As John Simpson wrote: "Since the first world war, every war in which the Americans have fought has been marked by unnecessary civilian deaths … Now, it seems, there may be a new distinguishing feature of American wars: the killing of journalists.""
Posted by Tony at 4:48 AM