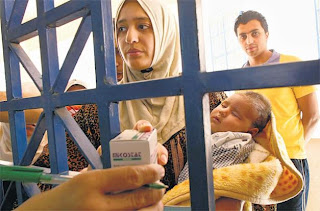 Generations of Palestinian refugees are still marooned in Lebanon. In a small way, British Muslims are trying to help, finds Mary Dejevsky

"....The difference was that this was in Lebanon; in the Beddawi Palestinian refugee camp to be precise, outside the battered northern city of Tripoli. And afterwards each child received an envelope with the cash that would help maintain them and fund schooling for another month.

The orphans' centre at Beddawi is where the children and their carers come to find the various forms of help provided by the British-based charity Muslim Aid and local NGOs. Most of the 400 or so children they help are not, strictly speaking, orphans. They are children whose fathers have died, gone to prison or simply left, and whose mothers – shunned by society – risk destitution. With no access to benefits from the the state of Lebanon, and with neither citizenship nor any prospect of attaining it, these children are doubly deprived.....

Peculiar to Lebanon, though, is the dehumanising contrast between the energetic post-war reconstruction to shiny first-world standards, and the unrelenting squalor of the camps. The truly glorious natural scenery only heightens the disparity. A shanty-town outpost of Burj Shemali follows a shoreline that, anywhere else, would be a prime site for luxury hotels. It is clogged with detritus; sewage flows direct to the sea, and the water floods back into the tumbledown houses.

Even in such a run-down city as Tripoli, with an overt military presence and sporadic clashes between an uncertain array of forces, the contrast between town and camp is immediate....

As hope of better conditions has been lost, so too has the dream, for many we met, of reclaiming the land of their fathers (grandfathers or even great-grandfathers). The murals and tattered posters of Yasir Arafat are faded; replaced, if at all, by photos of Hassan Nasrallah, leader of the Islamist paramilitary Hezbollah. Despite pointed questions from Tre and his film-makers – who were disappointed we lacked the time to go and "look across the border at Palestine" – few of the refugees we met, of any age, held out much prospect of ever seeing their ancestral land. For the young British Muslims, who had adopted the Palestinian cause as their own, this was hard to understand. Still harder, for me, was to accept the Palestinians' passivity in the face of their non-existent civic rights – even if citizenship amounted to accepting they would never "return"....."
Posted by Tony at 3:34 AM