Hezbollah: Our Missiles Are None of Israel's Business 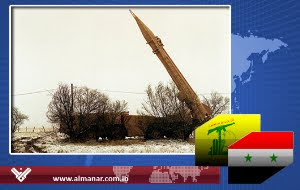 "16/04/2010 Loyalty to the Resistance Parliamentary bloc minister said on Friday that whether or not they have acquired scud missiles is none of Israel's business.

Minister Hussein Haj Hassan says the group was always arming and preparing itself but he refused to confirm or deny Israeli allegations that the Lebanese resistance group has acquired Scud missiles.

The U.S. State Department responded to the allegations on Wednesday by saying that if they were true, "it would put Lebanon at a significant risk."

Haj Hassan, meanwhile, told Al-Manar TV that since Israel possessed all kinds of weapons, it's only natural for Lebanon to have the means to defend itself against an Israeli attack....."

You have got to admire Nasrallah and Hizbullah; they are the only Arabs willing to stand up and tell USrael to butt out! And it is not all talk, Nasrallah speaks from a position of strength and confidence.

He rightly tells USrael that it is the right and duty of Lebanon to acquire whatever weapons it needs to defend itself. After the repeated invasions by Israel, does anyone blame Hizbullah?

Compare this confidence and clarity with the insipid niceties of the Rabbit of Syria. He denies that weapons are reaching Hizbullah; he wants improved relations with Washington; he wants to restart "indirect negotiations" with Israel.

Or how about that idiot, Qadhafi, who has just made the statement that even though the US and Israel act as one, he has no problems with the US! Further, he stated that resisting US imperialism is not his problem, but it is the problem of the rest of the world! According to him, Libya can't do anything to help the Palestinians. Finally he made the astounding statement that it is foolish to resist the US since it is a super power!

Too bad the Palestinians do not have anything even approaching Hizbullah.

I have a sneaky suspicion, based on several indicators, that an USraeli attack on Lebanon could be imminent; Hizbullah is taking the threat seriously. Before attacking Iran, USrael has to try to eliminate the retaliatory capabilities of Hizbullah.
Posted by Tony at 10:34 AM