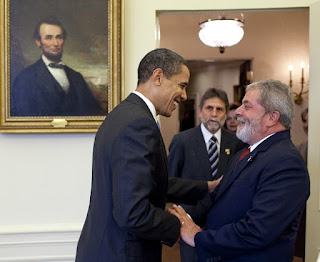 "Brazil is a country of paradoxes: President Lula embraces free trade, signs military agreements with Washington, is acclaimed as “Statesman of the Year” by the billionaires club at Davos in 2010 and has enriched bankers from Wall Street to the city of London; yet many western and a few Brazilian writers , Fidel Castro and other intellectuals and academics call him a “pragmatic leftist” or “progressive visionary”.....

Brazilian politics have moved a long way to the right over the past decade: the PT is now an openly pro-business party, whose fiscal policies are a mirror image of the IMF recipes. The once militant trade confederation, the CUT, is now little more than an adjunct of the Ministry of Labor, well rewarded with economic subsidies but incapable of putting workers in the streets. Even the mass based rural landless workers (MST) which still retains its organizational autonomy feels weakened and isolated in the face of the PTs right turn. On the other hand, agro-export elites are thriving, investment bankers and overseas multi-nationals are pouring over $30 billion a year into Brazil; one of the worlds “safest emerging world powers”. Leftist leaders like Fidel Castro and Hugo Chavez praise Brazil’s “progressive” foreign policy even as Lula signs defense pacts with Obama for joint training and military exercises.No doubt Lula has gained greater international recognition for Brazil and will finish office with the greatest popularity ratings of any President in recent history. Yet with a cost of living comparable to that of Barcelona, over 30%, of Brazilian wage workers still receive a minimum wage of $200 dollars a month; the public school teachers in Sao Paolo receive between $436 - $505 dollars a month. One has only to visit the millions dwelling in the slums surrounding Sao Paulo, Rio and the other major cities to realize that there are two Brazils: the mass media publicized Brazil of the BRIC, the banker’s ‘emerging world power’, the Brazil of free elections and free markets .Then there is the “other Brazil” of forty million impoverished slum dwellers, twenty million landless rural workers, tens of thousands of dispossessed (Amazon) Indians, thousands of unpaid ‘slave laborers’ living in debt peonage, the millions of public school teachers, working two, three or more shifts up to 13 hours a day to earn a decent pay. Lula’s presidency may have raised Brazil’s international stature and gained him the status of a ‘global statesman’ but most workers, peasants and Afro-Brazilians still work and live under Third World conditions. "
Posted by Tony at 6:18 AM