Hypocrisy and the end of empires

"....The brief moment of clarity reminds us of the crucial role played by one of the most subtle yet damning of human vices - hypocrisy - in sustaining the problems confronting the US, and most other global powers for that matter.

Hypocrisy has always been an important denomination of political currency, but today it has seemingly become the coin of the realm.....

However, the continuities in US foreign policy between the Obama and Bush administrations reflect a more systemic hypocrisy whose negative consequences have global implications. 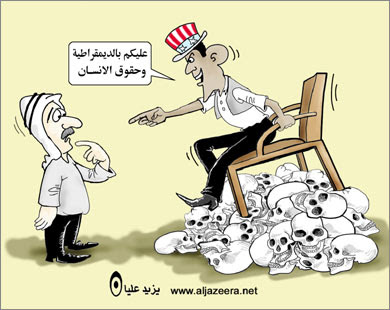 The US - like great powers before it - has long declared its intention to support freedom, democracy and progress while pursuing policies that encourage, or even demand, their opposite.

Not surprisingly, it has also turned a blind eye to its allies' or clients' hypocrisies: Israel declaring its desire for peace while intensifying occupation, Hamid Karzai, the president of Afghanistan, promising to fight corruption while rigging elections and placing family members in crucial positions.

Then you have this or that Arab leader pledging democratic reform while continuing to arrest and abuse citizens - until the disconnect between words and deeds threatens core American interests.....

The most recent opening in the haze of media and political hypocrisy began with the near simultaneous revelations of civilian deaths at the hands of US forces in Iraq and Afghanistan.
The now ubiquitous Wikileaks video footage of soldiers firing on Reuter's photographer Namir Noor-Eldeen, his colleague Saeed Chmagh, and several other civilians in Baghdad in July 2007 was equalled in graphic power by the accusations that in February 2010, US special forces personnel had not only killed two pregnant women along with a teenage girl and two local officials in Khataba, Afghanistan, but carved the bullets out of the bodies to remove evidence of their responsibility for the deaths.
The hypocrisy of the official responses has been glaringly on display.....

Gates assumes that scenes of US soldiers blithely calling the victims "dead bastards," laughing, looking for an excuse to finish off an unarmed victim, and blaming other victims for "bringing their kids into a battle" will "not have any lasting consequences".