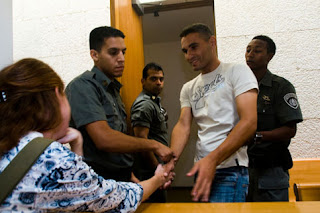 "Mousa Abu Maria, father of a newborn baby and co-coordinator of the grassroots Palestine Solidarity Project (PSP) in the occupied West Bank village of Beit Ommar, was used to the sound of boots running on the ground and surrounding his home in the middle of the night. Awakened once again at 2:00am on Tuesday, 6 April, Abu Maria told an international volunteer with PSP who was sleeping in his house not to worry but that they should start moving the computers out of the rooms. Weeks earlier, PSP's office was raided by Israeli forces; computer hard drives and printers were confiscated as Abu Maria's entire family was forced to stand outside in the freezing cold. But when Abu Maria looked outside the window this time, it wasn't Israeli forces shouting at him to come outside. It was a squadron of heavily-armed Palestinian Authority (PA) police.

"They told me that they needed to talk with me for just one hour," Abu Maria told EI on the phone from Beit Ommar. "But they kidnapped me, forced me into a jeep, and took me to the Hebron police station where they held me until the next afternoon. They acted exactly like Israeli soldiers, accusing me of hitting a police officer during a demonstration -- a totally fabricated claim."

PSP has been instrumental in coordinating weekly demonstrations in front of Route 60, the "settler road" that runs alongside Beit Ommar and connects Jerusalem to the settlement colonies in the Bethlehem/Hebron area, and Abu Maria has borne the brunt of Israeli backlash for his involvement in the group's nonviolent direct actions...."
Posted by Tony at 8:27 PM