Hanan Ashrawi: No chance for peace with Netanyahu 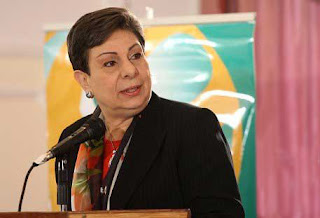 Dr Hanan Ashrawi, the first woman to be elected a member of the PLO’s Executive Committee, is skeptical that Prime Minister Benjamin Netanyahu and Palestinian Authority President Mahmoud Abbas could deliver if U.S. President Barack Obama indeed goes ahead with a new Middle East peace plan.

“I know Netanyahu even before Madrid,” she told Haaretz.

“Do I think that peace is possible with this government? No. This government is doing everything possible, in every way, to undermine perspective of peace. To preempt talks, to act unilaterally, to challenge, to provoke, to escalate, particularly in Jerusalem. And the language that is coming from some members of the coalition – it’s language of pure racism and hatred. So it’s not just the policy, it’s the actions on the ground. And even to the point that they are really want to act as occupiers not only in the West bank and in Gaza, but also in Washington.

Politically, Netanyahu has decided that he works with Shas and Yisrael Beiteinu, and that type of coalition doesn’t bode well for peace at all and stability or non-violence or any type of responsible communication. But I really cannot forecast what would happen with another government. Because what we need to see – it’s not certain statements and proclamations, but actions on the ground.”
Posted by thankgodimatheist at 2:49 AM