As the bodies continue to mount in Syria, its people prepare for civil war 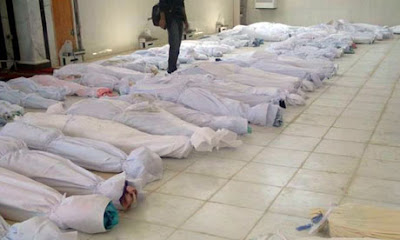 "....The massacre of the children of Houla and their parents has deepened the sense of crisis here, though many Syrians are becoming inured to violence. Unlike the rest of the world, which focuses on Syria only intermittently when there is some particularly gruesome outrage, people here may be losing their sense of shock after seeing 13,000 die in the last 15 months, according to the latest estimates.

But the most frightening indication that something is wrong is the emptiness, the absence of people and vehicles in previously crowded streets. Many stay at home fixated by a crisis they largely see unfolding on television and online. In the hotel where I am staying in Damascus, I am the only guest......

Damascus is deeply affected by the crisis, though this is not always visible. The banks have been cut off from the rest of the world. "All the banks in Lebanon are terrified of doing business with Syria," said one wealthy businesswoman. "My bank manager in Beirut did not want to take a deposit I made even though the cheque was drawn on a British bank." Many in Damascus know first-hand about the physical destruction wrought by the fighting in the centre of the country. There are some 400,000 Syrians displaced by the turmoil, mostly from Homs, who have taken refuge in the capital. Often they move into apartments previously occupied by Iraqi refugees who have returned home, some claiming that for them, Baghdad is now safer than Damascus. "
Posted by Tony at 7:35 AM