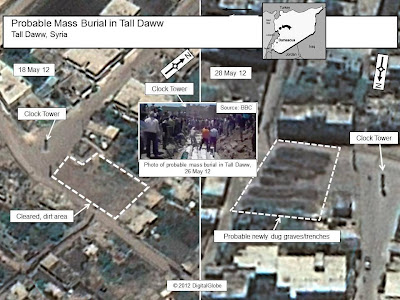 "The US state department has published satellite photos said to show mass graves in Syria after government forces attacked civilian areas.A website operated by the department is displaying the photos, taken by a commercial satellite, of what it says are mass graves dug following a massacre near the town of Houla. They also show apparent artillery impact craters near civilian areas of a town called Atarib.

The US says the pictures line up with images from the ground supplied by Syrian opposition forces that purport to show the people of Houla burying victims.

Included on the web page of humanrights.gov, run by the state department, are other pictures that apparently show artillery on 31 May near near three Syrian towns and attack helicopters near the towns of Shayrat and Homs. The Syrian regime has not issued a response to the photos......."
Posted by Tony at 4:34 AM