Houla massacre: US accuses Iran of 'bragging' about its military aid to Syria 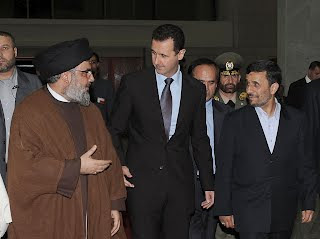 As nations expel Syrian diplomats, US state department says the militia accused of Houla killings is modelled on Iranian Basij

"....."The Iranians have clearly supplied support and training and advice to the Syrian army, but this Shabiha thug force mirrors the same force that the Iranians use. The Basij and the Shabiha are the same type of thing and clearly reflects the tactics and the techniques that the Iranians use for their own suppression of civil rights," she said.

"It was Assad and his regime that created this Shabiha force to begin with. It very much models the Iranian Basij model where they hire young guys to indiscriminately wreak vengeance and do this kind of hand-to-hand violence."

Nuland further implicated Iran by drawing attention to the timing of a claim by the deputy head of its Quds force, Esmail Ghani, that it has played a "physical and non-physical" role in Syria, and that if it were not present "the killing of citizens would be greater".

"We find it interesting that it was on this very weekend that the deputy head of the Quds force decided to take credit for the advice they're giving to Syria," she said....."
Posted by Tony at 4:00 AM