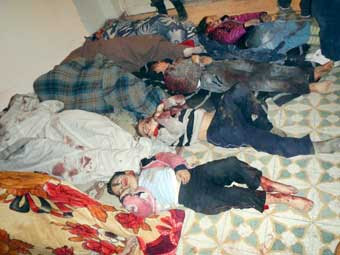 As UN envoy warns of all-out war, a major has provided crucial evidence on the Houla killings

"A senior Syrian military officer has described how he defected to opposition forces after witnessing hundreds of pro-regime militiamen carry out the now infamous massacre of more than 100 civilians in the town of Houla one week ago.

The account of Major Jihad Raslan comes as the United Nations' special envoy to Syria, Kofi Annan, yesterday warned of an increasing risk of imminent war in Syria. "The spectre of an all-out war with an alarming sectarian dimension grows by the day," Annan told an Arab League gathering.....

Raslan served until last Saturday in the Syrian Air Force in the strategically vital port city of Tartous. He had been in Houla on leave when the town was shelled just after 1pm last Friday, then invaded by a civilian militia, known as the Shabiha, in the worst single atrocity of the Syrian uprising.

The officer's account to the Observer of what took place is among the most important of the testimonies to have emerged since the massacre, the aftermath of which appears to be causing fresh turmoil inside Syria 16 months after the first stirrings of revolt inspired by the Arab spring.

Raslan said he was in his house, around 300 metres from the site of the first massacre in the village of Taldous, when several hundred men whom he knew to be Shabiha members rode into town in cars and army trucks and on motorbikes.....

"We used to be told that armed groups killed people and the Free Syria Army burned down houses," he said. "They lied to us. Now I saw what they did with my own eyes.".....

"I want to get my two brothers to leave. It is a very sensitive, dangerous situation for my family. Everyone is at risk. From the beginning we knew that they were lying. Everything was a lie. But my family is the most important thing. We need to protect each other."......"
Posted by Tony at 2:24 PM