Syria's massacre of the innocents 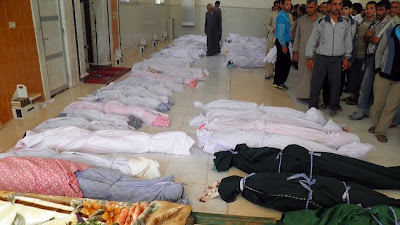 "SYRIAN forces continued to attack rebel strongholds last night despite international condemnation over the massacre of 92 people, including 32 children.....

The massacre in the central town of Houla and violence elsewhere were taking place "under the eyes of the UN observers", the rebels said, urging the international community to "announce the failure of the Annan plan"......

But while several nations called for "urgent international action", progress remained unlikely amid continued resistance at the Security Council by Russia and China to anything more than its current condemnation of violence.

UN officials counted 92 bodies at the scene of the massacre in Houla, near Homs, over the weekend. The officials said 32 of the dead were children aged 10 or younger.

Human Rights Watch said witnesses had confirmed that Assad forces had "shot people in cold blood". The incident was the worst in the 14-month uprising......

The massacre led to waves of anger across Syria and a new round of protests, setting the scene for an escalated confrontation between rebels and the regime. More than 10,000 people are believed to have been killed since the uprising began in March last year, at the height of Arab Spring revolts across the Middle East and north Africa.....

But the condemnation had no effect on the Syrian regime.

The Syrian Observatory for Human Rights, a British-based human rights group, said last night it had reports that Syrian forces continued to attack targets in Hama and Rastan.

Regarding Rastan, the group said: "The town is being hit at a rate of two shells a minute."

The global community's position has been weakened by the continued refusal of Russia and China to support a Security Council resolution calling for the immediate resignation of Mr Assad....."
Posted by Tony at 8:24 AM