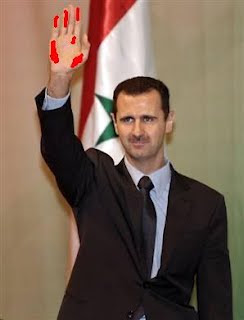 "The US has joined Britain, France, a host of other EU countries, Australia and Canada in expelling Syrian diplomats in a chorus of global outrage at the massacre of more than 100 people, including scores of children, in Houla.

On a day when the UN reported that many of those killed at the weekend had been shot at close range, France's foreign minister, Laurent Fabius, described the Syrian president, Bashar al-Assad, as "the murderer of his people". Bob Carr, his Australian counterpart, condemned "a hideous and brutal crime"......

Anti-Assad Syrians were sceptical about the move. "Don't jump to conclusions about expulsions of Syrian ambassadors," tweeted the commentator Rime Allaf. "It's symbolic; doesn't mean intervention at all!" Ausama Monajed, a member of the SNC, said: "The expulsion of the Syrian ambassadors is proof that members of the international community know who is the butcher and killer in Syria, and who is responsible for inciting violence and pushing the country into a civil war. This is a proof that Annan plan will never work in this conflict. Mediation, negotiation and political solutions are alien to Assad.""
Posted by Tony at 1:21 PM