Egypt's Presidency: A referendum on the revolution? 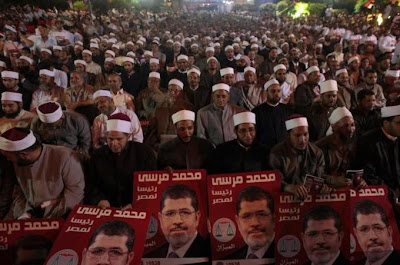 In June, Egyptians will take to the polls to effectively vote for - or against - the revolution.

".......In this respect, the Ikhwan are to blame. They have reneged on their earlier pledge not to contest the presidential elections.

And it is that miscalculation that today has placed the revolution on an unsteady footing at the end of what was meant to be the culmination of the transition period. Worse still is that having erred on the side of caution, the Ikhwan have not only divided the popular vote, but also opened the door for a man closely associated with Mubarak to recapture the highest political office in Egypt.

Faced with this sinister scenario, boycott of the mid-June run-off elections cannot be an option for those who rose up against dictatorship in the January 25 revolution. Similarly, it is no longer for the Ikhwan, and many of its high-ranking members opposed fielding a presidential candidate.
To this end, Morsi and the machinery behind him must broaden their political horizon when devising tactics and strategies for the run-off round. This they must do with Sabbahi, Hamdeen, Al'Awwa, Ahmed Maher and the April 6 Movement, Copts, women, amongst others.

A contract is needed for going back to the basics of revolutionary transition: coalition-building, compromise, broad inclusiveness, partnership, and power-sharing. The ball is particularly in the Ikhwan and FJP's court. There is a single lesson and trajectory henceforth: to rule with others through a contractual and normative agenda that transcends ideology, partisanship and interest.

The June referendum is a rendezvous with history for all Egyptians - and Arabs. It will be the vote of the century - no election will have such significance for the presence and future of a nation and the Arab world as whole. It is the vote by which a nation will either live or die, and the flames of a revolution will once again be extinguished or rekindled."
Posted by Tony at 3:21 PM