Egypt's women have had enough of being told to cover up 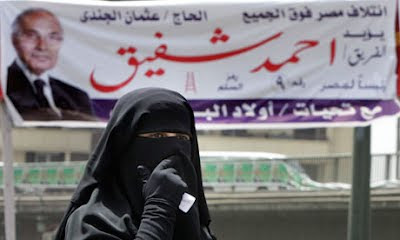 "While all eyes are focused on the presidential race, on the streets of Egypt, inch by inch, bit by bit, women's rights are shrinking. Women, Muslim and Christian, who do not cover their hair or who wear mid-sleeved clothing are met with insults, spitting and in some cases physical abuse.....

And the Islamists have made it worse. A Coptic Christian woman said to me "we and our Muslim friends who do not cover our hair get yelled at by men passing by telling us 'just you wait, those who will cover you up and make you stay at home are coming, and then there will no more of this lewdness'". It was, she said, as if they were gloating over the fact that we were being pushed off the streets.....

To express their opposition to the political instrumentalisation of Coptic women by Bishoy for his own political ends, about 50 Coptic women and men staged a protest in the Coptic Patriarchate in Abbassiya on 18 May. This was the first time in the modern history of Egypt that Coptic Christian women had risen against a member of the clergy in protest. It is the first time they had collectively raised their voice to demand their rights as Coptic Christian women. The protests did not go well with all Christians: what's wrong with modesty many said, why attack the church now? Others said that while they completely sympathised with the cause of the protesters, this was not the time...."
Posted by Tony at 4:40 AM

nice posting.. thanks for sharing..