Syria: 'Why is the world not doing anything to help us?' 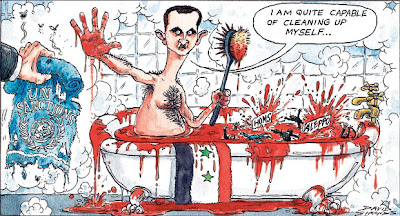 For more than a year the international community has stood by as Assad's forces torture and murder indiscriminately.

""Why is the world not doing anything to help us? We demonstrated peacefully and from the first day we were beaten and shot at. Then the army came into our villages and fired at us with tanks and helicopters and burned and destroyed our homes. Is the world just going to keep watching and do nothing until we've all been killed?"

This was the recurring theme during my week in the Jabal al-Zawiyah area (northwest of Hama) investigating human rights abuses.

Everywhere I went people told me about relatives being dragged away and shot dead, and everywhere I saw houses and shops which had been deliberately burned down.

Civilian casualties are rife and detainees are routinely tortured - in some cases to death - by the various Syrian security and military agencies. Indiscriminate shooting and shelling from army positions into villages continues.

These are not isolated incidents. They are part of a much wider pattern across the country, very similar to what I found further north, in Idlib city and surrounding areas, where I carried out field investigations at the end of last month.

For more than a year the major world powers have been doing little more than collectively wringing their hands about the "complex political situation" in Syria. It is imperative that human rights and humanitarian concerns be addressed without further delay and not be held hostage to an as yet elusive political process.

The only initiative which the main international players could agree to, the UN's observer mission recently deployed as part of the Kofi Annan plan, lacks a mandate to monitor and investigate human rights abuses, including war crimes and crimes against humanity.

Yet the need for such a mechanism is all the more pressing given the Syrian government's persistent denial of access to the country to independent human rights organisations.

The establishment of a robust mechanism for monitoring and investigating crimes against humanity, war crimes and other human rights abuses, which should be equipped with the powers and resources necessary to ensure that those responsible for committing and ordering such crimes will be held accountable, would send a clear message to those responsible for such crimes that they cannot count on perpetual impunity.

The prospect of a possible forced retirement behind bars might just prompt some of those who are part of the system responsible for some of the worst excesses to rethink their options sooner rather than later."
Posted by Tony at 7:06 AM