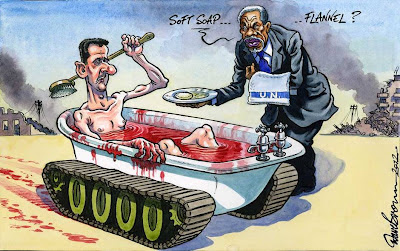 "This is not the first time Kofi Annan has found himself charged with maintaining the decorum of polite international diplomacy against a background of mass murder.

Annan was the head of UN peacekeeping operations at the time of its two greatest failures, the genocide of Rwanda Tutsis in 1994 and the killing of up to 8,000 Muslim men and boys from the Bosnian town of Srebrenica in July 1995. In both cases, UN troops under Annan's command were on the ground, and in both cases disastrously failed to save the lives of the civilians they were supposed to protect...."
Posted by Tony at 4:12 PM