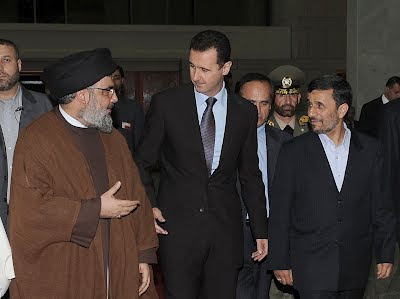 "A senior commander in Iran's Revolutionary Guards has admitted that Iranian forces are operating in Syria in support of Bashar al-Assad's regime.

Ismail Gha'ani, the deputy head of Iran's Quds force, the arm of the Revolutionary Guards tasked with overseas operations, said in an interview with the semi-official Isna news agency: "If the Islamic republic was not present in Syria, the massacre of people would have happened on a much larger scale."

Isna published the interview at the weekend but subsequently removed it from its website.

It quoted Gha'ani as saying: "Before our presence in Syria, too many people were killed by the opposition but with the physical and non-physical presence of the Islamic republic, big massacres in Syria were prevented."

The west has accused Iran of providing military and technical support to Assad to quell protests since the start of the uprising in Syria. Iranian officials in return played down the accusations by saying the country only supported Syria morally.

As the wave of protests swept across the Middle East, Tehran's leaders found themselves in the peculiar situation of praising the uprisings in Tunisia, Egypt, Bahrain and Yemen but condemning them in Syria, its close ally in the region......"
Posted by Tony at 4:09 AM

Not to forget that Tony supported Iran and its terrorist organizations Hizbollah, Hamas, Islamic Jihad, and others.