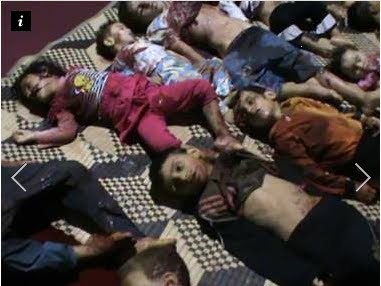 For world leaders, condemnation is the easy bit. Nato's role in Libya will not be replayed in Syria, and Assad knows it

".....Agreeing a coherent and effective international response to the bloodiest crisis of the Arab spring is looking more rather than less difficult, despite levels of cruelty and depravity that will rank Houla alongside infamous killing grounds elsewhere.

Responses so far suggest more of what has been tried and found wanting over the last 14 months: on top of a non-binding UN statement, there is talk of yet more EU sanctions; another meeting of the Friends of Syria group; a frosty few minutes at the Foreign Office for the Syrian chargé d'affaires......

Every idea that has been suggested to help the opposition and weaken the Damascus regime, for example humanitarian corridors, no-kill zones, safe areas, would all require offensive military operations. Those are not on the cards.

Syria in 2012 is looking more and more like Bosnia 20 years ago: measures by the international community to mitigate the conflict either have little effect or actually make it worse. If 300 UN observers have proved ineffective, will 10 times that number be any better? Will Houla prove to be a defining moment? The bitter truth is that there may be many more such atrocities before anything much changes."
Posted by Tony at 7:15 AM