EGYPT HEADED FOR AN EXPLOSION 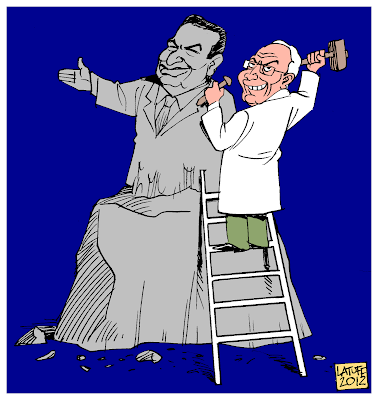 Another Use For Ahmed Shafiq, by Carlos Latuff

"The second, decisive round of Egypt’s presidential election will be held 16 and 17 June. If former general and Mubarak regime stalwart Ahmad Shafiq somehow wins, it’s almost certain the vote was manipulated.

A huge popular explosion in Egypt will very likely ensue. Egyptians are already furious their first democratic election of a president was distorted by the state election commission, a tool of the military junta now ruling Egypt. The commission vetoed many popular and capable candidates from the election for spurious reasons, so corrupting the election in advance. The vote was set up to split the votes of Islamists between numerous candidates.

In the end, two candidates, the Muslim Brotherhood’s Mohamed Morsi and former Maj. General Ahmad Shafiq, were left facing one another in the runoff vote.....

The Islamists were to blame for some of this. They failed to unite, splitting the vote. They failed to convince deeply worried Coptic Christians, who comprise 10% of Egypt’s population, that Islamists would not be a threat to Christianity or enforce draconian Salafist practices. They did not sufficiently emphasize their commitment to democracy or youth issues.

Another key factor that I witnessed across Egypt was the military junta’s ploy of withdrawing police from the streets and actually encouraging a crime wave to develop in a nation that was one of the world’s most crime-free societies in spite of its grinding poverty. Many Egyptians were frightened by the rising crime wave into supporting Shafiq and his military backers who vowed to crush crime with an iron first.

Even so, it strains comprehension that Shafiq is now running neck-a-neck with Islamist Morsi. There is even talk that if Shafiq wins, he will name the hated former intelligence chief Omar Suleiman as prime minister. A Shafiq victory would mean a return to absolute Mubarakism, without Mubarak....."
Posted by Tony at 8:11 AM