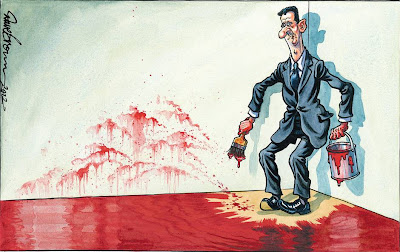 "Kofi Annan flew out of Damascus yesterday amid news of fresh atrocities on the ground and as the Syrian opposition accused Russia of encouraging the regime to commit “savage crimes” against its people after Moscow ruled out supporting any new action at the UN.

Even as Mr Annan's observer mission announced the discovery of the bodies of 13 Syrians who appeared to have been summarily executed, Russian Deputy Foreign Minster Gennady Gatilov said any new measures at the Security Council would be "premature", diminishing hopes that the shocking massacre at Houla could break the deadlock at the Security Council......"
Posted by Tony at 9:44 AM