Egypt's elections: join our resistance to the counter-revolution 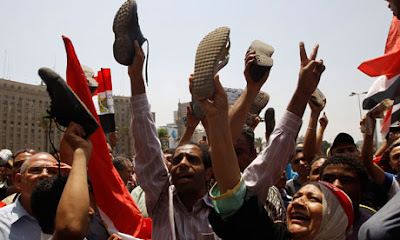 The Egyptian presidential election is an attempt by the military to gain international legitimacy. Our revolution must continue

" From the beginning of the Egyptian revolution, the powers that be have launched a vicious counter-revolution to contain our struggle by drowning the people's voices in a process of meaningless, piecemeal political reforms. This process has been aimed at deflecting the path of revolution and the Egyptian people's demands for "bread, freedom and social justice." Since Mubarak was forced out of power only 18 days into our revolution, the discourse of the political classes and the elites (including both state and private media), continues to privilege discussions of rotating ministers, cabinet reshuffles, referendums, committees, constitutions and most glaringly, parliamentary and now presidential elections.

From the very beginning, our choice was to reject in its entirety the regime's attempts to drag the people's revolution into a farcical dialogue, with the counter-revolution shrouded in the discourse of a "democratic process" that neither promotes the demands of the revolution nor represents any substantial, real democracy. Thus our revolution continues, and must continue.....

If these elections take place and are internationally recognised, the regime will have received the world's stamp of approval to make void everything the revolution stands for. If these elections are to pass while we remain silent, we believe the incoming regime will licence itself to hunt us down, lock us up and torture us in an attempt to quell all forms of resistance.

We continue on our revolutionary path, committed to resisting military rule and putting an end to military tribunals for civilians and the release of all detainees in military prisons. We continue to struggle in the workplace, in schools and universities and with popular committees in our neighbourhoods. We call on you to join us in our struggle against the reinforcements of the counter-revolution. How will you stand in solidarity with us? If we are under attack, you are also under attack – for our battle is a global one against the forces that seek our obedience and suppression.

We stand with the ongoing revolution, a revolution that will only be realised by the strength, community and persistence of the people; not through a poisonous referendum for military rule."
Posted by Tony at 4:44 AM