Women Look for a Place in New Egypt 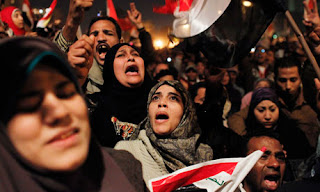 "CAIRO, Jun 2, 2012 (IPS) - "It was so frustrating but so exciting at the same time," recalls 15-year-old Mariam Assam, a year-10 student in Cairo. Assam was recalling the days she tried to join protestors during the Egyptian revolution in January 2011 but was intially prevented by her parents who said street protests were no place for a girl to be....

At a mass protest by Egyptian women in Cairo shortly after Mubarak’s overthrow, women were booed, shoved and told to go back home by groups of men. During parliamentary elections earlier in the year, conservative Islamists took a lion’s share of the seats.

Muslim Brotherhood presidential candidate Muhammad Mursi opposes women being allowed to serve in the presidency. He has called for implementation of Islamic law and, at campaign rallies, referred to Islam’s holy book, the Quran, as the constitution.
But Egyptian feminists are up against more than Islamist politicians. A large portion of Egypt’s population is politically and socially conservative. That includes many women: 30 percent of women are unable to read or write.

Egyptian feminists have argued that these women were coerced into voting for conservative elements, and were unable to understand the implications of what they were supporting. Against this background was the excellent social services provided by the Muslim Brotherhood for the poor and illiterate, where a good portion of the Brotherhood’s support comes from....."
Posted by Tony at 7:38 AM