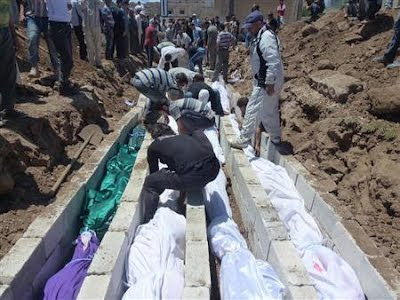 "The United Nations Security Council must move beyond condemnation of Friday’s attack that killed scores of civilians in the Syrian town of Houla and immediately refer the situation to the International Criminal Court (ICC), Amnesty International said.

The Syrian military’s barrage of shells, mortars and rockets and raids on the residential area of Teldo on Friday left at least 108 dead, including 34 women and 50 children, according to sources Amnesty International has talked to, among them an eyewitness to the attack’s aftermath.

“The high civilian death toll – including scores of women and children – in Houla must spur the Security Council to act in unison and immediately refer the situation in Syria to the ICC,” said Philip Luther, Amnesty International's Middle East and North Africa Programme Director.

“As the killings escalate, the UN observer mission to Syria must have its scale and mandate enhanced, and the Syrian government must allow the Independent International Commission of Inquiry set up by the UN Human Rights Council to enter the country to investigate allegations of abuse by both sides to the conflict.”

Amnesty International has received the names of more than 1,300 people killed in Syria since the start of a UN observer mission on 14 April....."
Posted by Tony at 3:57 AM