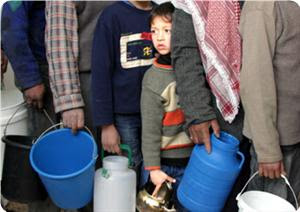 "GAZA, (PIC)-- The popular committee against the siege warned that Israel is seeking to spread deadly diseases and epidemics in the Gaza Strip through tightening its siege on one and a half million Palestinian people, adding that hundreds of Palestinians would die if an environmental catastrophe happened in the Strip.

MP Jamal Al-Khudari, the head of the committee, explained that the Israeli restrictions on the entry of fuel supplies to Gaza led to the stop of sanitary facilities and equipment which run on electricity.

MP Khudari added that Israel also does not allow in medicines and prevent travel for medical treatment outside Gaza which led to the death of more than 170 patients so far.

The Mizan center for human rights strongly denounced Tuesday the IOA for depriving Palestinian families from visiting their imprisoned sons and daughters in Israeli jails and escalating its repressive measures and violations against Palestinian prisoners, pointing out that the visitation program has been halted since June 2007.

In a statement received by the PIC, the center underlined that the Israeli prisons authority maltreats Palestinian prisoners through carrying out arbitrary inspection campaigns, assaulting them physically and punishing them by locking them in solitary cells.

The statement pointed out that the Israeli prisons lack the minimum medical services, where there are no appropriate clinics and medicines.

The statement called on the Red Cross to pressure the IOA to end the arbitrary measures pursued in its jails against the visiting families and prisoners and to expand the visit time and the number of relatives allowed to visit prisoners.

In another context, dozens of Palestinian families and friends of the siege victims participated at noon Tuesday in a picket organized by the popular committee against the siege in front of the UN building in Gaza to demand the lifting of the Israeli siege on the Strip and to call for putting an end to the collective punishment policy pursued by Israel against the Palestinian people.

The protesters carried banners and pictures of Palestinian patients including children and women hailing from different parts of Gaza who died as a result of the unjust Israel siege. Some of the banners called on the international community to intervene to save the Gaza people.

During the sit-in, Rami Abdo, the spokesman for the committee, underscored that there are 1,300 patients in Gaza deprived by Israel from travel for medical treatment outside Gaza on flimsy security pretexts, pointing that many of those patients are children and barred from travel for the same reasons.

In new development, a Palestinian patient suffering from kidney failure called Ahmed Yousef, 63, was proclaimed dead Tuesday in Gaza after his attempts to travel for medical treatment were hindered by the Israeli restrictions. His death, thus, raised the number of the siege victims to 178 patients."
Posted by Tony at 5:39 AM