Israel’s nuclear bombs are the problem in the Middle East 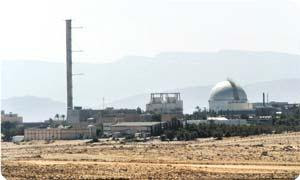 "Once again, Israel is pushing the Middle East to the brink of war, with predictably disastrous consequences. In recent days, Israeli leaders markedly escalated their war of words against Iran. A leading Israeli cabinet minister was quoted on Friday, 6 June as saying, “attacking Iran will be unavoidable.”

Similarly, Israeli Prime Minister Ehud Olmert, just back from a meeting with George W. Bush in Washington, sounded almost euphoric when he spoke of an “American-Israeli consensus on the need to stop Iran’s nuclear program by whatever means necessary.”.....

Joseph Goebbels, the Nazi propaganda minister said “If you tell a lie big enough and keep repeating it, people will eventually come to believe it.” This is exactly the maxim being adopted by Zionist leaders who are spreading lies, disinformation and half-truths about Iran in order to get the madman in Washington D.C. and his gang of neocons and war criminals to attack another Muslim country on Israel’s behalf.......

Nonetheless, the main Israeli motive behind its hostility to Iran stems from Israeli worries that a technologically advanced and militarily strong Iran might pose a credible challenge to Israel’s strategic supremacy in the region.

The recent speech by the Democratic presidential candidate Barack Obama during AIPAC’s convention last week is very telling. It proves once again that the international Zionist cartel, of which AIPAC constitutes the American chapter, tightly controls the American political discourse and that any American politician who dares speak his or her mind about Israel’s slow-motion genocide of Palestinians or more recently about America’s relations with the Muslim world, will be committing political suicide......."
Posted by Tony at 1:00 PM