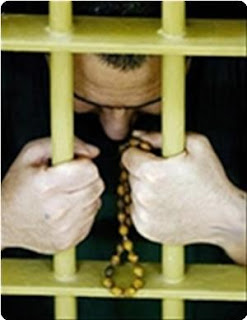 "GAZA, (PIC)- The ministry of detainees and ex-detainees in Gaza stated Wednesday that the Israeli intelligence apparatus started using the term "unlawful combatant", which has no basis in international law, to justify the detention of Palestinian prisoners for an indefinite period without charge.

Riyadh Al-Ashqar, the director of the ministry's information office, underlined that the use of such a term incurs serious legal and human rights consequences where the IOA uses it to continue detaining Palestinian prisoners without pressing any charges or indictment against them or granting them a fair trial at the pretext that there are secret files which prove that they are "unlawful combatants".

Ashqar pointed out that this decision is a gross violation of the minimum standards of human rights and international humanitarian law especially the fourth Geneva convention on the protection of the civilian population because it deprives the detained from their right to defend themselves before the courts.

The Palestinian official appealed to the international community to stop Israel from continuing to violate international law and to impose sanctions on it for violating the laws it signed.

In a related development, the Palestinian official strongly denounced the Israeli military court for extending arbitrarily the four-year imprisonment term of Sheikh Hasan Yousef, a member of the Hamas parliamentary bloc, to six years at the pretext of the secret file.

Meanwhile, the IOF troops at the Container checkpoint in northern Bethlehem detained at noon Wednesday MP Samira Al-Halaiqa, a member of the Hamas parliamentary bloc, and kidnapped journalist Mohamed Al-Qiq who was present with her......."
Posted by Tony at 4:09 AM