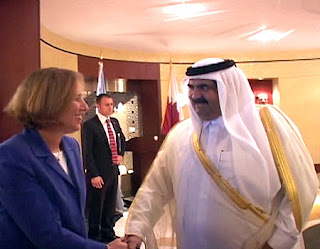 "02/06/2008 The frontrunner to become Israel’s next prime minister, Tzipi Livni, was a Paris agent for Mossad, Israel’s overseas intelligence agency, in the early 1980s when it ran a series of missions to kill Palestinian terrorists in European capitals, according to former colleagues quoted by the Sunday Times.

"They say Livni, now foreign minister, was on active service when Mamoun Meraish, a senior official in the Palestine Liberation Organization, was shot dead by a Mossad hit squad in Athens on August 21, 1983. She was not directly involved in the killing, in which two young men on a motorcycle drew alongside Meraish’s car and opened fire, but her role in Mossad remains secret," Times said.

Shortly afterwards Livni resigned and returned to Israel to complete her law studies, citing the pressures of the job.

A quarter of a century later, Livni, 49, is poised to become prime minister amid accusations that Ehud Olmert, who has led Israel for the past 2½ years, accepted bribes from an American businessman.

An opinion poll on Friday showed that Livni had more than twice as much support inside the ruling Kadima party as Shaul Mofaz, a former defense minister who is her chief rival. Political commentators believe that Olmert will resign soon.

According to Times, Livni joined Mossad after leaving the army with the rank of lieutenant and completing a year at law school. From her base in Paris she travelled throughout Europe "in pursuit of Arab terrorists."

“Tzipi was not an office girl,” said an acquaintance quoted by the paper. “She was a clever woman with an IQ of 150. She blended in well in European capitals, working with male agents, most of them ex-commandos, taking out Arab terrorists.”

Livni has never talked about her years with Mossad, but a glimpse of the nature of the work was given by her closest female partner on European assignments. “The risks were tangible,” said Mira Gal, who became head of her ministerial office. “If I made a mistake the result would be arrest and catastrophic political implications for Israel,” she told the Times.

Livni's career was forged in the violent creation of Israel. Both her parents were arrested for terrorist crimes against Palestinians in the 1940s. Her mother Sarah, who died recently aged 85, was a leader of Irgun, the militant Zionist group that operated in Palestine at the time of the British mandate and whose massacres committed along with the Hagana gang mass killings constituted the most horrible crimes of the century.

Livni’s father, Eitan, was sentenced to 15 years in jail for attacking a British military base. He escaped, the Times said."
Posted by Tony at 5:59 AM