"We are still waiting to visit our sons and daughters" 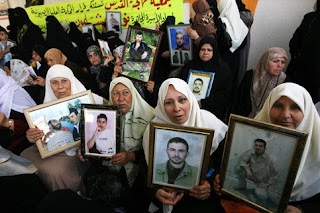 Report, PCHR, 3 June 2008
(This report is part of the Palestinian Centre for Human Rights' Narratives Under Siege series)

"Every Monday morning a crowd of women gather in the courtyard of the International Committee of the Red Cross (ICRC) in Gaza City. Most of the women arrive carrying a framed photograph of one or two men. When journalists start to arrive at around 10am, the women ask them to take pictures, and to film the vigil. "Some of us have been waiting more than six years to visit our sons in Israeli prisons" says one woman, "and we have all been forbidden to visit the prisoners in Israel for a year now. So we want our jailed husbands, sons and daughters to see us in newspapers and on television. They will then know that we haven't given up."......

The Gazan prisoners are jailed in a foreign country and are already extremely isolated. Their families are now forced to rely on the ICRC relaying messages back and forth in order to maintain any contact. Before the family visits program was suspended on 6 June last year, the ICRC was relaying around ten messages a month from Gaza, now they are relaying more than 300 messages a month. The ICRC has just released a statement, reiterating that "Whilst we acknowledge Israel's security concerns, we strongly believe that they alone cannot justify the all-out suspension of family visits to detainees."

Fatima Abdullah, whose son, Abdul Halim Abdullah, has been in jail in Israel for 19 years, sums up why the mothers of the prisoners welcome journalists into their midst. "My son saw me once, on television" she says. "He managed to call me at home, and he said, 'Thank you for supporting all of us, but don't look so sad mother, I am still alive.'""
Posted by Tony at 6:18 AM