Between oppression and empowerment 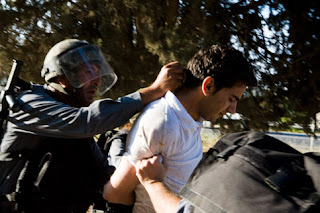 A Palestinian citizen of Israel is arrested by Israeli riot police at a protest commemorating the 60th anniversary of the Nakba in Saffuriya village outside Nazareth, 8 May 2008.

(Nimer Sultany is a Palestinian citizen of Israel and currently a doctoral candidate at Harvard Law School. He has worked as a human rights lawyer in the Association for Civil Rights in Israel and as the head of the political monitoring project at Mada al-Carmel (the Arab center for applied social research).

".......Where does this leave us? Or, if you will, where does it lead? Prophecy has been given to fools and children as the Old Testament says. So, I do not want to predict scenarios. But it is likely that the intensification of oppression, faced with a growing empowerment of the oppressed, will lead to further confrontation. The Israeli establishment is alarmed by developments in the Palestinian minority and is presenting an iron fist policy in order to deter and subjugate. But one cannot reverse historical processes, and the spirit of freedom, once unleashed, cannot be suppressed for a long time without considerable costs. The "Vision Documents" demonstrate that the Palestinian citizens are no longer content with the leftovers of rights and the status of being considered unwelcomed guests who are granted an inferior citizenship. One of the documents, the Haifa Declaration, was published shortly after the forced exile of Azmi Bishara, with this message: fear is over. The existence of Palestinian citizens in a Jewish and Zionist state reveals the inherent contradiction of the Zionist project: you cannot have a Jewish supremacy and claim that you are democratic because you do not propose equal and universal citizenship. Nelson Mandela issued the freedom charter in June 1955; the South Africans won their freedom 40 years later. My hope is that it will not take us 40 years after the publication of the "Vision Documents" to achieve freedom and equality in our homeland."
Posted by Tony at 9:34 PM