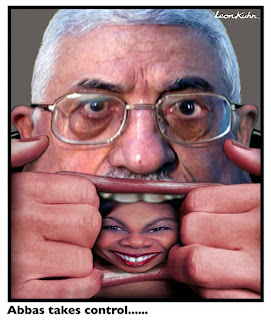 Abbas to stand again for president

"Despite having said in past he would not seek additional term, top Fatah official says Palestinian President Abbas intends to run in 2010 elections.

Palestinian President Mahmoud Abbas, who has said he would not seek another term, will stand in presidential elections scheduled for 2010, a senior official said on Saturday.

Fatah officials have said they would press Abbas, who has also reportedly threatened to resign unless Israel and Palestinian officials reach a peace agreement by the end of the year, to run again because they had no better alternative.

The long-dominant Fatah faction was defeated by Hamas, its Islamist rival, in 2006 parliamentary elections, ending more than 40 years of Fatah ascendancy. Hamas later routed Fatah forces to take over the Gaza Strip in June 2007, leaving Abbas' authority to the West Bank.

Younger members of Fatah have said the Hamas's victory reflected dissatisfaction over the monopoly of power and corruption with some of the older guard. They have demanded internal elections to inject new blood into the movement......."
Tony: This tends to strengthen the view that the puppet's announcement about dialog with Hamas is nothing but a cynical political move to polish up Fatah's and his own image ahead of yet another election.
Posted by Tony at 6:42 AM