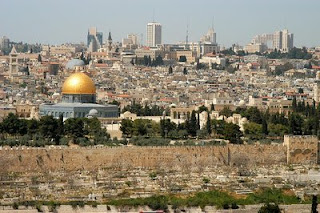 "The Israeli Parliament passed in preliminary reading a bill on Wednesday to ocndsider the city of Jerusalem as capital of Israel and all the Jews world wide.

The bill was submitted by the right wing Israeli National Religious party to amend the Basic law which considers Jerusalem as capital of Israel. The bill passed in the ruling coalition with a majority of 58 to 12.

In an interview with the Israeli online Haaretz Avhsalom Vilan, an Israeli MP who voted against the law change deemed the bill as "nonsense" adding that he is worried that this law will lead the collapse of the entire peace process.

Vilan also expressed worries that Jews around the world will be involved in decisions related to Jerusalem if such bill is finally approved.

"We're lying to ourselves for political reasons to make it impossible to reach a political solution in Jerusalem," he said. "Jerusalem will be the capital of the Palestinian state also," he added.

On the other hand, Palestinian officials are downplaying the chances that a solution can be reached by the end of 2008, as promised by Israeli and American high officials.

Ahmad Qurei, a senior Palestinian negotiator, said on Wednesday that only a miracle will bring peace by the end of the year.

Since Israel occupied the city of Jerusalem 1967 a great effort have been made by the Israel in Israeli to create a Jewish majority in Jerusalem. Palestinians demand that any lasting peace entails East Jerusalem as Capital of the future Palestinian state.

In 1982, Israelis Knesset passed a law to officially annex Jerusalem to Israel proper. Such a resolution reflected negatively on Palestinians who live in Jerusalem, especially that home-demolition under the pretext of no building permits increased. Israel rarely give permits to Palestinians to build in East Jerusalem."
Posted by Tony at 7:04 AM