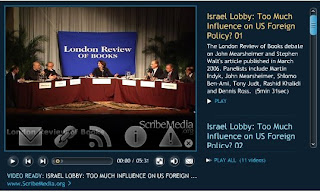 "In March 2006, the London Review of Books published an article by John Mearscheimer and Stephen Walt titled “The Israel Lobby: Does it Have too Much Influence on US Foreign Policy”.
The article caused an uproar and was called anti-Semitic in many US newspapers and magazines. The London Review of Books debate took place at Cooper Union in New York City and was captured by ScribeMedia on their behalf. The panelists were John Mearscheimer, Shlomo Ben-Ami, Martin Indyk, Tony Judt, Rashid Khalidi and Dennis Ross. The moderator was Anne-Marie Slaughter, Dean of the Woodrow Wilson School of Public Affairs."
Posted by Tony at 4:24 AM