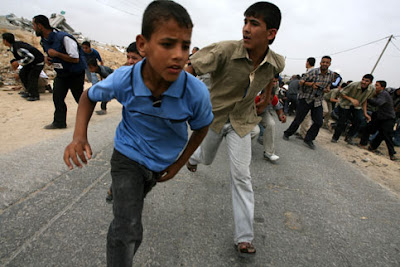 Palestinians in Gaza take cover during clashes with Israeli troops during demonstrations marking 60 years of Palestinian dispossession from their homeland, 15 May 2008.

"Each American claim to moral authority becomes a foul excretion in light of US complicity in Israel's barbaric and illegal treatment of the Palestinians. Washington deploys its superpower apparatus to smother dissent against its Middle East policy in Europe and elsewhere, leaving former president Jimmy Carter and Nobel laureate Desmond Tutu as lonely defenders of Palestinian human rights. No change in American policy is on the horizon, as "the rot in America goes beyond this administration, and so does the rot in Israel." The "abomination," as Desmond Tutu describes it, against 1.6 million people in Palestine shows the hypocrisy of American and Israeli pretenses to civilization........"
Posted by Tony at 8:11 AM